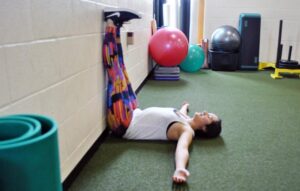 Source: ​5 Things I Learned From Throwing My Legs Up a Wall Every Day | Runner’s World

1. FOR SOMETHING SO SIMPLE, THE BENEFITS ARE ENORMOUS.

The official name for legs-up-a-wall is viparita karani, which literally means “inverted in action” in Sanskrit. The pose helps reverse the typical actions that happen in our lower bodies as we sit and stand all day. And it’s especially useful right after you move around for a workout. According to LaLonde, it’s best to do this move as soon as you can after a workout (within 30 minutes) because having your legs warmed up and your veins dilated will make circulation to the rest of your body easier. In essence, this inverted pose aids your overall recovery by draining fluids that are pooling in your legs, while also stretching your hamstrings and relieving a worn out lower body.“You’re creating a positive circular flow to your core,” LaLonde says. “Circulation really matters when it comes to recovery because lactic acid and waste don’t leave your body very fast. Being in an inverted position helps it all to drain faster.”Here’s how to do the move: Lie down on your back and try to get your butt as close to the wall as possible, extending your legs up, perpendicular to the floor. Open your arms to the sides, palms up. Flex your feet for an added hamstring stretch. If that’s too uncomfortable, LaLonde says you can scoot away a bit so your legs are at an easier angle.While I thought I might have to work up to that 90-degree angle over time, I was able to get right up against the wall. Even on the the first attempt after my run, I could feel my hamstrings stretching in that “hurts so good” sense. I’ve done all the usual hamstring stretches before, like bending down to touch my toes, but it’s safe to say that legs-up-a-wall became an instant favorite.
2. IT FIXED OTHER PROBLEM AREAS.

Not only did religiously throwing my legs up a wall for two weeks loosen up my hamstrings, but also it relieved a lot of tension in my neck and back.

I spend six or seven hours a day, five days a week sitting at a desk staring at a computer. Although my posture isn’t horrible, it could still use a bit of work, as evidenced by the pressure on my neck and shoulders that always seems to be getting worse. So it was music to my ears when LaLonde told me legs-up-a-wall opens up your upper body and negates the forward hunching position from sitting at a desk typing away.

It was about a week in when I was sitting in my car, waiting for a red light to turn green, that I realized my head didn’t feel like it was the weight of a bowling ball on my shoulders.

One unintended benefit of this move was having nearly 10 minutes of uninterrupted me-time. LaLonde says the pose is a good way to practice rhythmic breathing and meditation, and while I didn’t quite get to that level, I made it a point not to answer any texts or scroll through social media.

In an age of technology where you can feel like you must be connected at every moment, I ended up really embracing this reprieve. It was kind of hard (read: really hard) to do at first because I wasn’t used to it. I’m that person who has had Twitter open on both their laptop and their phone at the same time. Call this a severe case of FOMO, but this has happened on multiple occasions.

Throughout the past two weeks, though, I’ve learned not to care so much about being attached to my phone. Nothing is that urgent.

4. IT GOT EASIER WITH TIME.

LaLonde says you’ll reap the benefits holding this position anywhere from five to 15 minutes, so I started out small by holding it for six minutes at a time. Things weren’t going too badly—I was in less pain than I thought I’d be—after the first four days. I ended up doing legs-up-a-wall wherever it made the most sense after my workout: at the gym with everybody around, or sometimes at my house when I got back from a run. Yes, I could have easily done legs-up-a-tree outside instead of waiting until I got home (I was still within the 30-minute window), but I couldn’t help feeling like that was more than a little strange.

I decided to bump up my wall time to eight minutes on the fifth day. It was at this point I realized my challenge would be more of a mental one as opposed to physical.

I have to admit that after the initial six minutes were up, I more than periodically glanced over at my stopwatch to see how much longer I had left. I didn’t think it was possible for two minutes to feel like two hours. Quite frankly, it was hard not to be somewhat bored when doing this move. I knew that looking at the clock wouldn’t make the minutes tick by any faster, and it seemed ridiculous that I couldn’t do something as simple as relax, so I made the conscious decision to just be patient.

When I no longer had to will myself to not check the time, I upped my wall time to 10 minutes, which I figured was a happy medium given the range LaLonde originally told me.

5. IT WILL BE A STAPLE IN MY RECOVERY ROUTINE.

In the wise words of Emily Gilmore, “If it brings you joy, you keep it. If it doesn’t, out it goes.”

I’ve applied this sentiment to many areas of my life since watching Gilmore Girls: A Year in the Life, including this one. As I write this, I’m still doing 10 minutes at a time, but I might try 15 minutes at some point, because why not?

Overall, I definitely noticed I wasn’t as sore and tight as I usually am after my harder runs and workouts, which was awesome. Discovering a way to have a less creaky neck and better posture were nice added benefits.

Sure, I might get the random stare in the gym as I lie prone on the floor with my legs pointing toward the heavens, but at least I know what I’m doing will put me in a better position to do my workout just as strong the next day.